It used to be optimistic.

Even as I railed against the AmericanWarOnIraq and debated TheRightWing I was optimistic that the tools and InternetCulture were making the world infinitely better and wiser.

As I come back to garden and clean it up and update the links, it is filling more with stories of ConspiracyThinkingAsWikiSickness, the terrifying rise of QAnon in light of MimesisAndCivilization.

Or the real conspiracies such as the machinations of CambridgeAnalytica. Leading to a global RightWingCoup

This beautiful DigitalGarden is also a picture of an apocalyptic wasteland. A world where TheEndOfConsensus makes any kind of society infeasible. What's the point of KnowledgeManagementTools when any kind of "knowledge" is moot?

NetoCracy's epistemic pollution is worse than I imagined when it all seemed a rather clever cynical story I was telling.

Of course, I still love and celebrate the tools, but the story in ThoughtStorms is increasingly ambivalent.

But also, perhaps, a morally invigorating call to arms. Because tools got us into this mess. Maybe we still need better tools to get us out?

Or is that just the madness of repeating the same thing over and over again? (IvanIllich is weeping.) 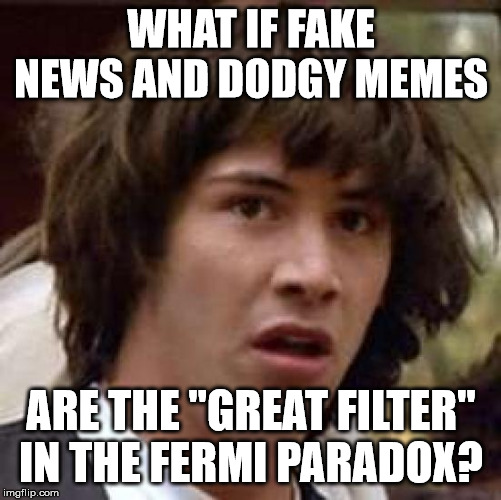 Quora Answer : Has the Internet had a net positive or negative effect on society?

It's too early to say.

I think in general it's been good, but over the last 5 - 10 years the scales have been tipping towards bad as :

the internet becomes more of a massive surveillance device. And privacy is almost extinguished.

"removing the gatekeepers" which many of us thought was a good idea at the time, has led to a proliferation of lies and disinformation; and a break-down in consensus about fundamental facts. We're way out beyond political conspiracy theories and climate change denial now. We're into an age where things like flat-Earthism are starting to pick up significant mind-share, and where we're facing a resurgence of dangerous diseases due to anti-vaxers.

social platforms like Facebook and Amazon and Uber are becoming monopolies which control huge sectors of our economy and lives. These platforms already can and do abuse their position and massive lock-in suggests that they're unlikely to be replaced

angry and resentful people are finding each other forming mutually supportive communities within which their resentments are reinforced and amplified. From ISIS to school shooters to white supremacists to incels, we're seeing the internet turn some of humanity's most broken and twisted individuals into dangerous organized movements committing real violence

We've yet to see how far these three trends will go. But they don't have to go so much further before, I think, the scales will have fully tipped and we'll be forced to say that the internet has been a net negative.