Do I really need a fucking Q-Anon page in this wiki?

If you wanna be really depressed, go and read TheArchDruid on MimesisAndCivilization. And realize how well Q-Anon fits the bill for a whole outsider mythology rising up as faith in the elites and their cognitive world collapses.

Growth in the UK

Q-Anon is DeepState disinformation campaign to distract from real revelations about bad behaviour of the elites by conflating them with obvious nonsense. I'm not wholly convinced, but it's GoodConspiracyThinking

Being hacked by artists?

Or another religious cult?

Quora Answer : What is your opinion of Qanon?

For a while, a few years ago, one of the most interesting, and smart bloggers around was a guy who was apparently an Arch-druid.

He was particularly strong on writing about ecology and peak oil. But he was also a great writer and thinker about the collapse of our modern civilization. And he had a disturbing, longish essay which I recommend to everyone : The Broken Thread of Culture

Roughly, he was drawing on Arnold J. Toynbee's theory of the collapse of civilizations, which is that collapse tends to happen when the masses stop identifying with and admiring the elites and stop valuing the ideas and truths of the elites. Instead the masses turn to admiring outlaws, fringe cultures and obscure cults.

It is, it has to be said, a fairly conservative, reactionary and pessimistic model of the world. Quite unlike the world-view I usually subscribe to which sees the people rising up against the elites in a more positive way.

It's also frighteningly prescient of what's going on at the moment. We are, indeed, seeing the masses rebelling against everything that the elites present to them as "the truth".

This is a function of the social contract breaking down, as wealthy elites grab everything they can for themselves and prioritise maintaining their status and power over any other responsibility for the welfare of the masses. Wealthy businessmen, politicians, media figures etc. seem to show decreasing concern for the poor. Even when they say something, this doesn't turn into meaningful concrete action. Even allegedly left-wing politicians who talk a good game, seem, in practice, to duck away from the dramatic actions that might actually redistribute wealth back from the silos of the super-elites, to the people.

As a consequence, there is very little respect for elites anywhere in society. And a great appetite for anything and anyone who claims to be against the elites, a disruptor of the world order, and who claims to know "the real truth" as opposed to the lies that the elites promote. Even other members of the elite, who are simply jostling for more wealth and power, if they are willing to portray themselves as enemies of the elite, coming to "drain the swamp", will get a positive hearing.

This phenomenon of a "culture-war" rebellion of the masses against the elites has given us a right-wing populist insurgency against alleged "Liberal Elites" in Holywood, the media and academia and government. It's given us Donald Trump. It's given us major COVID denialism as people instinctively reject doctors. Etc.

And it has now given us QAnon. A perfect storm of anti-elite conspiracy theories. An open-ended, promiscuous, memestealer that happily embraces and extends all other conspiracies. It's gobbling up the New Age hippies, the anti-lockdown campaigners, the concerned yoga mums who are triggered by recycled Satanic Child Abuse stories; it's taking over the Trump fan-club (anyone who thinks Trump controls QAnon has things the wrong way around. Either Trump will become a QAnon spokesman or he'll get side-lined as the snowball rolls over him); it's going to suck in more subcultures and more of the right-wing political scene. (If you want to see some historical prefiguring of this, read A Culture of Conspiracy: Apocalyptic Visions in Contemporary America about how the right-wing New World Order conspiracies hybridized with the UFO cults)

The Arch Druid doesn't know anything about QAnon. I think his essay was written before it was on anyone's radar. Instead the Arch Druid talks about strange stories in children's homes, and compares them to the rise of Christianity, a fringe cult from the frontiers of a collapsing Roman empire, which eventually took over that empire and is still with us 2000 years later.

It's a stretch to think that QAnon has the same power. To capture the political class of our collapsing modern civilization, and become the religious template of the next 2000 years. But given its current rate of growth and hybridization, and the strong entanglements between the far-right, Evangelical Christianity, and these new conspiracies, it won't surprise me at all if QAnon becomes more or less official canon within some of these churches in the next couple of years. And becomes at least the new Scientology, if not a major offshoot of Christianity. It's going to be very hard to shake loose.

I was in Argentina at the beginning of 2020. (Before COVID hit) Fascinated by seeing roadside shrines to Gauchito Gil all over. Last week, after the death of Maradona, I watched Emir Kusturica's documentary movie about him, including scenes from the extraordinary Iglesia Maradoniana. As the Mormons can testify, the division between the real world and the realm of sanctified religious icons is more porous than we imagine.

Can Trump become a martyr? The man who was trying to save us from child abusing elites but was overthrown in a fraudulent election because the conspiracy was too deep and too strong from him?

Could Trump be beatified within a QAnon flavoured new offshoot of Christianity? 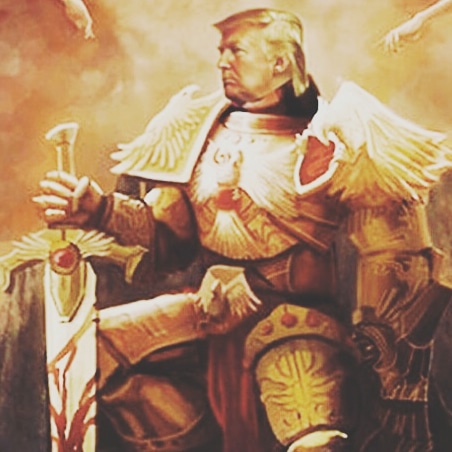 So that's kind of what I think of QAnon.

It's the biggest and best current example of how the masses have lost faith in the so-called wisdom and truths of the elites. And are rebelling by turning to alternatives which tell an anti-elite story.

And maybe this is both an effect and a cause of the collapse of our civilization into a new dark-age.