This is what happens when you fall flat on your face. 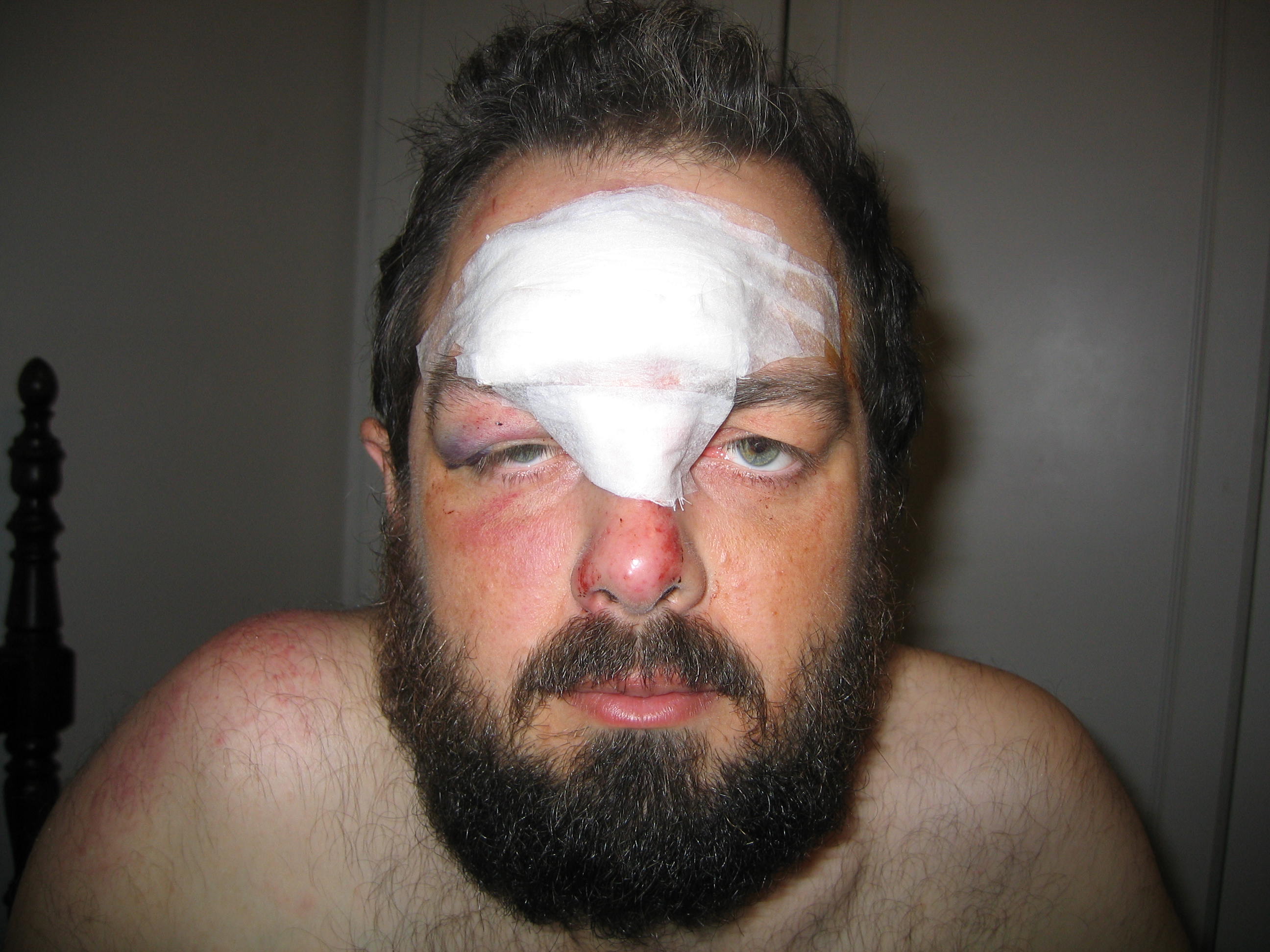 How did it happen?

Wednesday evening I went to a party and drank two Caipirinhas (a cocktail of lemon and cachaça, cachaça being the sugarcane based spirit of these parts.) I don't drink much alcohol these days and went home somewhat inebriated. Lying in bed with your head spinning is highly unpleasant, so I got up, drank lots of coffee and stayed up reading JeanFrancoisNoubel's paper on CollectiveIntelligence and happily scribbling lots of ideas in my notebook until I finally crawled to bed at 7:30 AM.

Then I had to get up at 9 because I'd arranged to give some help to a student who'd had to miss several lectures because of his job. I did the tutorial, and at around 11:40 started to walk home (a distance of about 2-3 KM). Somewhere around half-way I started feeling very light-headed. (Later explained as lack of blood-suger due to cumulative lack of sleep + the alcohol) A couple of times during the walk I felt I'd pretty much nodded-off and was sleep-walking. "Must get home quickly" I thought. Instead, the next thing I knew I was waking up in an ambulance, being taken to the hospital. That was pretty dream-like and I passed out again, only really waking up (and being very sick) in the hospital itself around 1.30.

So, no one really knows what happened. The best guess is that I fainted through lack of sleep / blood-sugar, and fell flat on my face on the concrete floor of the car-park of another college (the last place I remember passing through.) and knocked myself out.

Luckily I didn't break my nose. But I have 6 stitches in my forhead and one in my nose. And plenty of bruises on my face, shoulder and knee. (My eyes have swollen up more since this photo was taken.)

I am now determined to get a lot of sleep.

ouch! :^O Guess everybody's allowed to do something stoopid now and again. Kind of odd, really, but when someone who posts so frequently doesn't post it's kind of odd, wondering what's up, I'm starting to feel like my mum now. Healing vibes from across the pond. Get well soon! kk

Thanks kk. Vibes much appreciated. :-)

Ewwwww... I "did" something similar 10 years ago, and blacked out - did the nestle ice tea plung on my face. 42 stiches later - my nose was back on. I will try to dig up a picture to send you! Take care, MarkDilley

Thanks Mark. Yours sounds a lot worse than mine. I'm pretty much recovered though I still look like Frankenstein's monster. -- PhilJones

More vibes from me! (you should replace the pic with a smaller one) -- SebPaquet

thanks ... re : pic. Yep. It's just that I don't actually have any image processing software on my computer. So changing the pics from the camera is a bit of a pain. Need to do it though. -- PhilJones