There have been some very successful small hobbyist boards.

Contrast the Simputer which never really made it.

A propos cheap computers I've just bought a cheap Lenovo desktop - and unfortunately it does not even power on. –ZbigniewLukasiak

Quora Answer : If a tech-savvy person from 1995 could see a computer and operating system from 2015, what would surprise him or her the most about it? Which of the advances of the past 20 years did informed people anticipate, and which would be surprises?

Multi-touch screens were the last thing that made my jaw drop.

I'm impressed we have computers that can fit in the pocket and be driven by multi-touch on-screen keyboards and gestures. I didn't predict that before it happened. I'd just assumed that all the extra power we'd get would come in the same packet for ergonomic reasons that people would want a screen and keyboard.

I didn't expect the Maker movement, Arduinos, Raspberry Pis etc. where fairly powerful computers would be available in very small, very cheap hackable formats. The real exciting gains of Moores Law at the moment are down with the ESP8266 / nodemcu combination, the Raspberry Pi Zero, http://getchip.com/ etc. Computers that are as powerful as the ones we knew in 95, but for less than $10.

Quora Answer : What do you think computers will be like in 10 years? 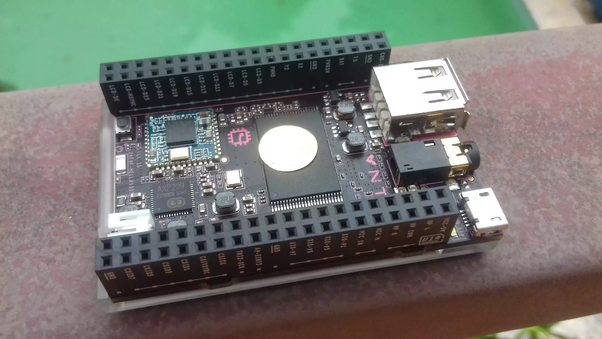 It runs Debian. A couple of weeks ago, I took one travelling with me instead of my laptop to see what it would be like to use for real work.

I successfully ran my personal "productivity" software (three Python based wiki servers and some code written in Racket) from it. It also has a browser, Emacs and I was doing logic programming with minikanren library in Python. It runs Sunvox synth and CSOUND too, though I wasn't working on those on this trip.

In 10 years time, that computing power will be under a dollar. And if anyone can be bothered to make it in this format, the equivalent of this Debian machine will be tantamount to free.

Of course most of that spectacular power will be wasted on useless stuff. But, to re-emphasize, viable computing power that you can do real work with, will be "free".

The pain is the UI. How would we attach real keyboards, decent screens etc when we need them?

I HOPE that people will understand this well enough that our current conception of a "personal computer" will explode into a "device swarm" of components that can be dynamically assembled into whatever configuration is convenient.

I, personally, would LIKE the main processor / storage to live somewhere that's strongly attached to my body and hard to lose (eg. watch or lanyard). I'd like my "phone" to become a cheap disposable touch-screen for this personal server rather than the current repository of my data.

I bought a cheap bluetooth keypad for about $8. It was surprisingly OK to type on, but connections with the CHIP were unreliable. In 10 years time, that ought to be fixed.

So, in 10 years time, I personally want a computer on my wrist that's powerful enough to do all my work with (that means programming and creating music). That can be hooked up to some kind of dumb external keyboard / mouse / screen interface (today the Motorola Lapdock is the gold-standard) that costs something like $20. Sure, I'll probably want cloud resources for sharing, publishing, storage and even high-performance processing, AI and "knowledge" etc.

And, of course, I want it to run 100% free-software that puts me in control.

This is all absolutely do-able.

Update 2018 : CHIP was a wonderful product but it seems the makers are in financial difficuties. I would not recommend trying to order / buy one at this time.

Phil Jones (He / Him)'s answer to In what direction computer science is going for next 10 years? I mean a hypothetical scenario?

Phil Jones (He / Him)'s answer to Where do you see computer programming languages heading in the future, particularly in the next 5 to 20 years?