I'm intrigued by this genre of MediaevalArt that I saw at the British museum today.

It's a finely carved ivory scene showing knights besieging a castle defended by women. An allegory of courtly love.

The knights are shown firing bundles of roses from giant catapults or firing flowers from cross-bows. 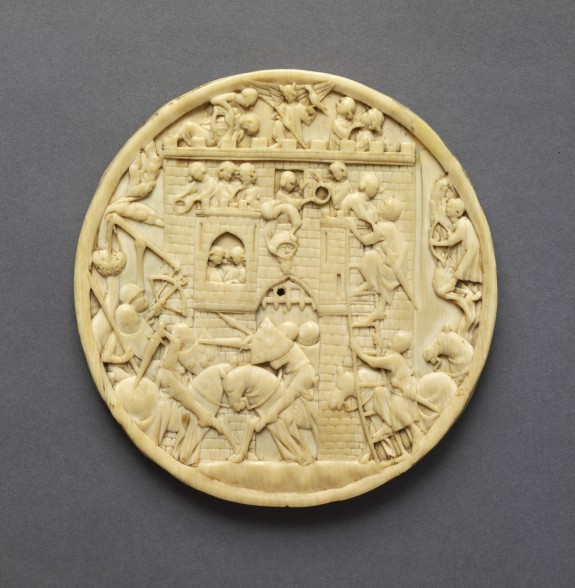 Via The Walters : Mirror Case with Attack on the Castle of Love :

The popularity of ivory luxury goods reached its height around 1350, but they were made well into the 15th century. Associated with intimacy, mirrors were often given as courting gifts. A portable mirror consisted of a case in two parts with a polished metal disk fitted inside. In this allegorical battle scene, knights attack ladies in a castle using catapults and crossbows that launch flowers. The ladies also shower their adversaries with flowers dropped from buckets. The god of love presides over all. A single knight has reached his lady by scaling the wall. This scene and those of the knights riding away may be three moments in an elopement narrative. The case originally had fantastic animals forming the four corners.

It immediately put me in mind of this classic image from Banksy. 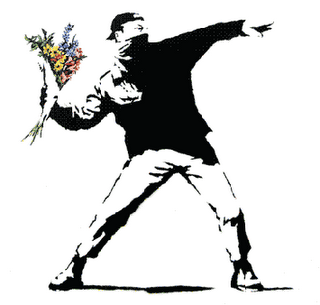 which I described in a comment on a Quora answer in the following way :

Why does it speak to so many people? I think it's because it brilliantly captures the tensions and frustrations many of us feel. We want to live peacefully, on the side of the flowers. We don't see ourselves as fighters, as rioters or as part of an angry mob.

And yet we feel called to the fight. We recognise injustice and oppression. And wish we could rebel against it.

We use the image to say I'm mad as hell. And I'm not going to take it any more. But damnit, this angry person isn't the real me.

Of course, there is something a bit DonkeyKong about this siege scenario too :

It’s the a classic trope of the 80s videogame. What, after all, is Jumpman’s fight with Donkey Kong, or Mario’s quest in the Mushroom Kingdom, but an update on the mediaeval theme of Attack on the Castle of Love?